Powertech Marines Sam Whittle managed to secure the Formula Grand Prix F2 British Championship after taking 3rd place in the final round at Stewartby in his second year in Formula 2. The Championship was held over 3 rounds of 4 races 2 jetty starts and 2 clock starts and Sam started and finished all 12 heats with the boat not missing a beat all season.

There was was fantastic racing and mixing it with some great drivers and all season battle with Leon Wigg who has really got to grips with the F2 Baba, great having Mette Brandt Bjerknaes from Norway competing in her super fast moore boat. Also Colin Jelf, Steve Holt and Ian Blacker in there quick Molgaards.

Great to have Jean-Batiste Thomas all the way from Rouen, France competing and taking the win today. Thank you o SWSC, all officials, rescue, volunteers and all competitors. 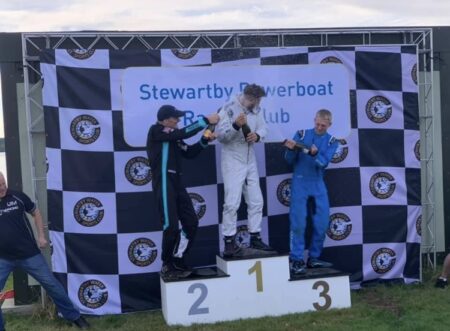